incomparable ability to remain relevant……Chief Justice Art undeniably continues to be a resonant voice, not just heard but read and listened to by many, from people with no legal background, to lawyers and law students, justices and judges alike, and even those of us currently sitting in the High Court. His columns discuss the burning legal issues of the day with more freedom than he had when he was sitting in the Court bound by its rules and proscriptions…..Chief Justice Art, we shall look forward to the 4th installment of “With Due Respect,” or the maiden issue of “The Art of Relevance” and to more opinions from you, our unofficial resident amicus curiae. Cheers!”

“As Chief Justice, he distinguished himself in that he strove to have as much unanimity as possible when the Court faced historic cases, painfully conscious that “the least dangerous branch” speaks loudest when it judges wisely and in one voice. As Inquirer columnist, he cultivates in the reading public that same consensus, knowing and reasoned, something we desperately ache for in this season of discord and debased public discourse, and through the Inquirer, in its varied platforms, he reaches out to the widest audience in the Philippines and abroad with the Filipino diaspora, to inform and ennoble that discourse.”

“While many of the columns deal with technical matters of laws, they are written in simple, understandable language that uses a minimum of legal jargon. Because of their simplicity of style, clarity of thought and unassailable logic, the columns make for interesting and instructive reading. Indeed, those who failed to read some or many of the columns by the retired Chief Justice will gain a better insight into the troubled years of 2007 to 2010 by going over this collection…
This is a book written by a moral man, a Christian who not only practices the forms and rituals of his faith but who also lives it, and through his columns, spreads the gospel of uprightness, morality, and goodness.”

– From the foreword of Inquirer Publisher Isagani Yambot 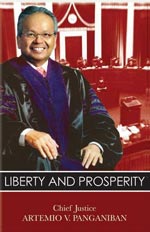 “Since he occupied the position of Chief Justice, his leadership – particularly in the timely disposition of the three cases involving Executive Order 464, the CPRpolicy, and Presidential Proclamation 1017, each of which was very important to President Gloria Macapagal-Arroyo who had appointed Art – was placed at stake and became crucial. All the three decisions on these crucial cases showed beyond doubt the independence and the competence of the High Court and, in particular, the quality of Chief Justice Panganiban’s leadership.”

– From the foreword of Former Senate President Jovito R. Salonga

“…[Chief Justice Panganiban’s] ninth depiction of the historical account of the Supreme Court where he now sits is a more vigorous projection of his venerable genius into the present, pointing out those fine moments when our national destiny bent and swayed to another bearing under the stewardship of the Supreme Court. His book avows that our national future is in safe hands because the fine memory of the past has been so bright.”

“In clear and convincing fashion, [Justice Panganiban] explains that in those decisions [involving business and economic cases] the Supreme Court has really been ‘a friend rather than foe of legitimate business’ by upholding the Rule of Law.”

The Bio-Age Dawns on the Judiciary

“Both a personal odyssey of a distinguished magistrate and a beacon of reason in a world awash with technological and scientific breakthroughs.”

– From the review of Justice Angelina Sandoval-Gutierrez 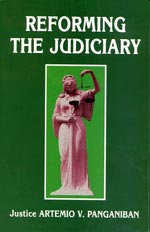 “This book captures the human drama played out by the people, places and events that are the stuff of Supreme Court decisions from 11 October 2001 to 10 October 2002, as culled from the first-person vantage point of Justice Panganiban.”

A Centenary of Justice

“True to his cherished belief, the author endeavors to keep the public informed, for it can only be helpful to the Supreme Court – and to the judiciary as a whole – for the public to be educated about its constitutionally appointed task as well as its role in a democratic state.”

– From the review of Justice Hilarion L. Aquino, Court of Appeals

“An eyewitness account of jurisprudential history as it was actually taking place, providing an insider’s view of the Supreme Court as it sweeps over the panorama of the nation’s social, political and economic life.”

Leadership by Example: The Davide Standard

“The first part of the book is given to reflecting on the Davide program of action for the judiciary, now more popularly known as ‘the Davide Watch’. Justice Panganiban’s assessment of the Davide leadership is sober, respectful and insightful. The second part of the book takes up interesting if highly contentious, controversial even divisive issues – such as the death penalty.”

– From the review of Fr. Ranhilio Callangan Aquino, Ph.D., J.D.

Battles in the Supreme Court 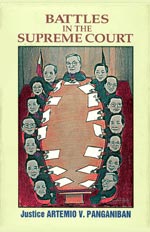 “It is a mark of his modesty that Justice Panganiban does not give center stage to his written opinions in this book; rather, he uses them to open what he calls a window to the Court, an insider’s account of how issues upon which its membership is more or less evenly divided are resolved; he does so in sufficient detail, even describing the seating arrangements, but without breaching the confidentiality that should attend the substantive aspects of those proceedings.”

– From the foreword of Chief Justice Andres R. Narvasa (ret.)

“This collection of writings and speeches of the author’s own choice and excerpting, modest as it is in volume though not in quality, nonetheless suffices to give the serious reader an insight into what may be called the twin beacons that have guided the professional and personal life of Mr. Justice Artemio V. Panganiban – those with which he has chosen to title this offering: Justice and Faith.”

– From the foreword of Chief Justice Andres R. Narvasa (ret.)

“This opus, which contains the speeches and papers of the author for the past 10 years, is a must reading for all lay faithful. It tackles the various dimensions of human existence that every Christian has to contend with. One can draw from it thoughts and ideas borne not from the mere knowledge of man but from the truth that proceeds from the wisdom of God.”

– From the foreword of +Jaime L. Cardinal Sin

Archived in the Supreme Court Library
1994

Books about the Chief Justice

A Test of Courage

“Artemio V. Panganiban – known as Art to his friends – was born poor. He grew up as a former newsboy and a bootblack in the impoverished section of Sampaloc, Manila. He was the youngest of four children. His father, just a high school graduate, was an underpaid but overworked government employee who took care not only his own children but also of his seven siblings. On every occasion, he would make it a point to stress to his children and siblings that education was the key to success and fulfillment in life.”

– From the foreword of Former Senate President Jovito R. Salonga

In Defense of the Rule of Law 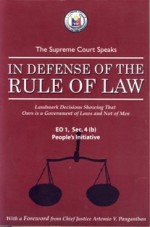 “Chief Justice Artemio V. Panganiban has been at the helm of the Supreme Court for less than a year. Yet what his term lacks in material time, it more than makes up for in significant achievement. After deciding three landmark cases earlier this year during its summer session in Baguio 2006, the Panganiban Court once again stood at the ramparts of history when it was called upon to decide two cases involving the Rule of Law. One case involved the search for truth; the other involved an issue that would have altered the course of the country’s political destiny.”

Archived in the Supreme Court Library
2006

In Defense of Liberty 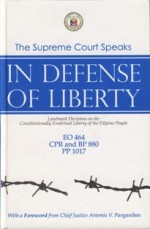 “During Chief Justice Artemio V. Panganiban term, the Supreme Court decided three nationally significant cases involving the following subjects:
1. Executive Order No. 464, which had barred executive officials from testifying in congressional investigations without the express approval of the President,
2. The so-called calibrated preemptive response policy of the Executive Department, and
3. Presidential Proclamation No. 1017, which had declared a State of National Emergency last February 2006 These cases had put to a crucial test the Chief Justice’s philosophy and policy of liberty and prosperity. The first case was decided by a vote of 14-0; the second, by 13-0; and the third, by 11-3.”

Archived in the Supreme Court Library
2006

“The title literally means ‘first among equals.’ The phrase has customarily been used to refer to the Chief Justice himself who, though he has only one vote as the other Justices in the Supreme Court, is considered the first among equals because of the unique position he holds in the judicial branch of government. He presides over the sessions of the Court, shapes its agenda, summarizes the discussions, and influences the direction and pace of its work. He is also the chief executive officer of the entire judiciary.

“Primus inter pares, however, also fittingly describes the selection of the decisions and opinions contained in this book. Chosen because of their jurisprudential value, they often blazed the trail with novel doctrines, answered difficult questions of law, and eloquently conveyed the convictions of Chief Justice Artemio V. Panganiban. Significantly, most of them have had profound impact on both the legal and socio-political history of this nation.

“It can be said that out of around 1200 full length signed decisions, 100 separate opinions and countless minute and extended (unsigned) resolutions penned by CJ Panganiban, the works contained in these two volumes stand out among the best in his 11-year term in the Supreme Court. These were selected by the legal staff of the Chief Justice, namely, Attys. Emma C. Matammu, Jenifer J. Manalili, Milicent N. Reyes, Sheryl Fortune Supapo-Sandigan, Joel Emerson J. Gregorio, Ma. Lourdes C. San Pablo, Cristina M. Bonoan, Anna Nerissa Paz-Perez and Anna Liza L. Su.” 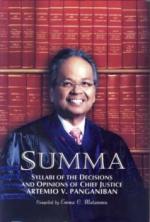 “The book contains for easy reference the legal principles meticulously distilled by Chief Justice Panganiban’s long-time legal assistant, Atty. Emma C. Matammu, from his ponencias and separate opinions. They are arranged topically according to the relevant fields of law. Atty. Matammu’s compilation of the doctrines of all of Chief Justice Panganiban’s ponencias and opinions is perhaps the noblest tribute one can give to the most prolific writer of the Court in his valedictory year.”